Please note that any sentiments expressed in this article are purely those of the author, colored by his own experience and perception. There are over three million Mongolians in Mongolia, and it is impossible to generalize all of them. These are merely some observations from almost five years spent living in the country.

On a perfect summer night in 2017, I watched as a group of Mongolian friends turned the corner of my building in the 40 Myangat neighborhood of Ulaanbaatar, and disappeared out of sight. I broke down into tears and crumpled onto the stoop. I was about to board a plane back to New York City, and although I am a native New Yorker, the trip felt as painful as if I were leaving home. It had been a three-day goodbye filled with meals, nights out, endless chatter flowing in and out of Mongolian and English, and gifts, culminating in everyone pitching in to help me pack, clean my apartment, and move out. After five years, my friends had become as close as family, and it was heart-wrenching to watch them go.

I often consider myself the “poster-boy” for expatriates in Mongolia who have integrated into the society, but I am far from the only example. I know a Japanese woman who has lived in Mongolia for more than two decades, running a honey bee sanctuary. One French man plays the national instrument of Mongolia, the Morin Khuur, practically as well as any conservatory student. An Indian man has successfully developed a chain of restaurants and can speak Mongolian not only with fluency, but with poise and nuance. The list goes on and on. From the Persian-born royal scribes of the Mongol Empire to today’s Russian scholars, people have been drawn to the country for centuries, carving out lives just as I did.

When I arrived in Mongolia in 2012, I had a choice of what kind of “expat” I wanted to be. For every integrated expat, there were scores of vibrant westerners who hung out together, spoke only English, did quiz nights at Irish-style pubs, held soccer tournaments, yoga, and other fun things that made them feel like they were right back home. While these circles provided great solace for me transitioning to my new life in Ulaanbaatar, the expats who had somehow integrated themselves seemed happier. They seemed to survive the cold winters a little better and be less phased by the idiosyncrasies of Mongolian life.

Even so, I wasn’t sold on integrating into Mongolian culture, originally. 2011 marked a peak in ultra-nationalist sentiment, a reaction to several multinational companies moving into Mongolia in the natural resource and finance sectors, and to an influx of Chinese migrant workers. A viral video circulated of a Mongolian woman having her head forcibly shaved by a group of men, ostensibly because she had married a Chinese national. A medical student in an English class I taught in 2012 mentioned to me that Mongolian men marrying foreign women would have Mongolian offspring, but the other way around would lead to half-breed (Mongolian: erliiz, a word commonly used for half-breed pack animals) children, and that they would develop “diseases such as homosexuality and mental illness.” Many foreign women reported high levels of sexual assault, and bar fights were especially prevalent between foreign and Mongolian men. Ulaanbaatar was considered dangerous for both locals and foreigners, and on one early morning trip to the airport I was badly assaulted outside of my apartment by a group of men who passed by as I was trying to hail a taxi. I like to imagine much of this has abated in recent years, but in 2012 I was proceeding with caution.

While I loved and appreciated the expat circles in Ulaanbaatar, I was determined to become someone who integrated into the society somehow. Inclusivity is a two-way-street, and in my case, the first few paces down that street consisted of learning the language, studying Mongolian music, and a stroke of luck to find a group of the most loyal, intelligent, and brave Mongolians to be my friends.

As a gay man, I immediately looked for LGBT-friendly spaces. Through word of mouth, I found out about an LGBT bar called 100%, and proceeded to meet and grow close to many Mongolians in the queer and activist communities. Unlike people in slightly warmer countries throughout the globe, Mongolians are not completely forthcoming upon meeting a new person. The broad smile with which an American might greet a stranger is seen as perhaps insincere or unwarranted. No one took me in right away. That grinning American surrounded by local friends in the poster for the study abroad program was not me.

I recognized that these people had no duty to accept me, but eventually they did. They spoke English with me, they waited patiently as I tried to form sentences in Mongolian, and as the years passed I began to feel at home in the LGBT community in a way I had never felt back in the states. The LGBT Pub and LGBT Centre in Mongolia are still the only queer spaces in the world where I feel accepted. The activists at the Centre know what I’m passionate about. The bartenders at the bar know which beer I like. Perhaps the lack of context for each other’s lives led to more unconditional acceptance, or perhaps we all needed refuge from the isolation we felt in society at large.

We grew together. We cried on each other’s shoulders and marched in the pride parade. We relished the looks we got from waitresses as we sat in a fast-food joint and jabbered on about trans rights or someone’s ex-boyfriend. There are many words to describe being gay, queer, or LGBT in Mongolian, many derogatory left-overs from the socialist period such as “gomo” (homo) or “tsenher” (blue, referring to a blue book published during the socialist era categorizing homosexuality as a mental illness). One term has appeared more organically in the past few years: “angi,” the same word to describe a class or grade-level at school. We became “classmates.” While I am not sure how the term came to mean “queer,” or even a general LGBT umbrella, it rang true for me. Many of us hadn’t had the most accepting friends growing up. The stereotypical laughing group of college or high school friends was somewhere else, forgetting to invite that one kid who never quite fit in. So we became our own class. Some of my queer and ally friends even specified our “class” with the moniker “9B.” None of us had known each other in 9th grade, but it certainly felt like we should have.

Even with our shared experiences, it took time. Language and culture barriers reared their ugly heads. Many days I would lose sleep thinking of how I might have inadvertently offended someone, or feeling embarrassed because I realized I had spent months using a word wrong. Countless times I sat silent with friends at the gay bar, watching the conversation dip in and out of words I could understand. Jokes flew by 30 seconds before I could make a reply. I would mull a sentence over in my mind for a full bus ride so I could express my thoughts to my significant other or a close friend after a long day at work. Bit by bit I worked at it. The more comfortable I was with the language, the farther I realized I had to go.

I began reading children’s books in Mongolian. First was an abridged version of Moby Dick that I barely understood (maybe more of the book’s fault than mine). I read other chapter books and then finally embarked on Mongolian short stories and novels.

Reading increased my comprehension immensely, particularly as I transitioned from a majority Mongolian work environment to being the music teacher at an international school. I was tasked with building an instrumental program and strengthening the vocal music curriculum in the secondary school of the American School of Ulaanbaatar. The students balked at first, wary of complicated-looking instruments. Many of them lacked any background in reading Western notation.

We grew together and built a formidable music department at the school. I learned from them, and they learned from me. My students were the brightest children I have ever met, picking up instruments and quickly progressing through practice and diligence. Their critical thought into their own lives made me think about my position as their teacher: why should an expat be teaching Mongolian students? What do I have to offer that a Mongolian teacher would not? Is English-language education a form of imperialism or an empowering response to globalization? Although my teaching focused on Western music, I emphasized that Mongolian music was just as rich and worthy of exploration.

At the end of my workdays, I commuted back from the suburbs to my apartment in the center of the city as the token foreigner on the #55 bus, and transitioning back into Mongolian from a day speaking English. Some days it felt like two worlds, and some days inseparable. Some days were exhausting, others exhilarating.

In 2017, I embarked on two vastly disparate musical projects: a production of the musical Kiss Me, Kate!, all in English with my students, and a season of “Universe Best Songs,” a singing competition and TV show not unlike “American Idol.” I would bike across the city from one event to the other and feel a sense of whiplash from the massive cultural differences between Ulaanbaatar Broadcasting System and my school, or between the queer community and my straight colleagues.

My worlds have never stopped colliding, my language skills have not become perfect, and I still could walk into a store in Ulaanbaatar today and be mistaken for a tourist fresh off the plane from Germany. But when I locked up my apartment last year for my return to the U.S. I was overcome with nostalgia. I would miss the park by my building, the buuz (dumplings), milk tea, and even the characteristic screech of bus brakes that would wake me up every morning. But I quickly realized those things were only markers of my experience in Mongolia. I began to think of my friends and my students, and that nostalgia turned into a much deeper sadness.

I can only hope that more and more foreigners feel as ensconced in the society as I did. Maybe someday shop attendants won’t gasp in surprise at a foreigner asking where the fitting room is in perfect Mongolian. Perhaps someday xenophobia can be eradicated. But it starts with people, and their willingness to truly connect, to learn, and to care for each other.

Joseph Lerangis lived in Ulaanbaatar, Mongolia for five years, where he served as a Fulbright Scholar, and taught English and music. He appeared on the famous singing contest, Universe Best Songs, where he gained recognition for his renditions of both popular Mongolian and English songs. Currently, he is pursuing a master’s degree in music, and hopes to return to Mongolia soon.

2 thoughts on “The Life of a Foreigner in Mongolia: Between Two Worlds” 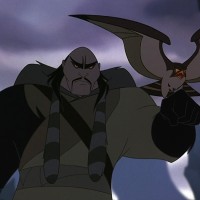 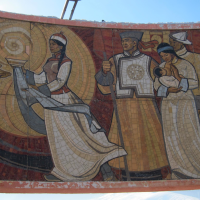 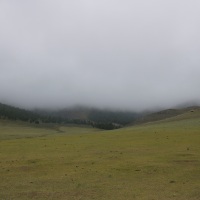 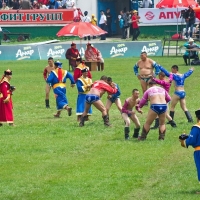