This is Part 2 of a two part series on the Belt and Road Initiative and how it affects Mongolia. Part 1 looked at what the BRI is and its current status in Mongolia. Part 2 looks at the reactions to it in Mongolia, and whether there’s anything to be done.

What are the effects?

The immediate economic effects are clear enough – open the borders, provide the finance, get the rails rolling, and the money will come. But like with anything in life, it’s not all about money.

There are political concerns.

Mongolians are worried that BRI will give China too much influence and power in the country. This is certainly valid. There has already been a number of instances of when China asserted its authority to push its own agenda in Mongolia. Remember when the Chinese FM urged Mongolia to “draw lessons” from the Dalai Lama’s visit and to “respect China’s core interests?” That one stung.

Let’s step back and also ponder this – do Mongolian citizens actually expect our illustrious politicians to do the right thing for the country when faced with notes of red Renminbi’s being waved in their faces? Right, I didn’t think so.

There are also very valid concerns that the increase in trade and mining activities will devastate the natural ecosystem – will China take proactive measures to prevent this? Will Mongolia? Probably not. In fact, it seems to be a race to see which side can exploit Mongolian natural resources first.

Political concerns never exist in a vacuum; they always affect every other aspect of society. If we start to look at every strand of potential future debilitation to Mongolian society that BRI presents, then this article will never end.

So let’s boil it down to what we can say with a good amount of certainty – BRI will have an impact – both good and bad – on the future development of Mongolia. Is there any way that Mongolians can take their destiny into their own hands and try to maximize the good and minimize the bad?

Camp 2 – We need Chinese investment in order to grow – there’s no choice.

The problem with either of these camps is that they are both passive. They acknowledge that change is here, and while Camp 1 turns in, turns away and closes the doors, Camp 2 throws their hands up and falls motionless to the ground.

Couldn’t there be a third camp? A camp 3 where we try to be active, where we try to pass good legislation that gives private enterprises the opportunity to grow, while also protecting our natural resources? A camp 3 that rallies our government to be more transparent in their dealings not only with foreign governments, but also in their personal finances? A camp 3 that pushes against misinformation and xenophobia, while also helping those in Mongolian society that feel like they’re being ignored and left behind?

I think there should be, and the volume on camp 3 needs to turn up in order to drown out Camps 1 and 2.

The BRI project, from whichever camp you’re in, has a lot to offer. Mongolia’s economy is in sore need of diversification, and development of higher-value add industries. Basically, we need more manufacturing and services industries, what economists usually call the secondary and tertiary, (primary is the extraction of raw materials, a.k.a. mining).

Already, BRI has had influence on Mongolia. In 2017, trade between Mongolia and China was up by about 42.2 percent to RMB 26.46 billion. The majority of total foreign trade volume was attributable to private enterprises – which is a good thing. The main trade products included coal, wood and copper, iron and lead ore, but also agricultural, mechanical, steel, automobiles, and high-tech.

We must remember that BRI is a long term project, set to run for at least the next 30 years. We need to clean up our house now, and be vigilant, making sure that our neighbor isn’t taking advantage of us, but that we’re also not allowing ourselves to be.

As Diane Weston from the 2001 classic Sugar & Spice once said, “A failure to plan is a plan for failure.” Certainly the government isn’t planning, at least not well, and it’s about time Mongolian citizens collectively rise to demand that they do.

2 thoughts on “Just What is Going on with Mongolia and Belt and Road? Pt. 2” 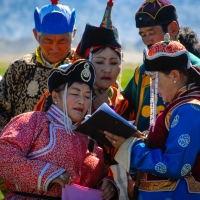